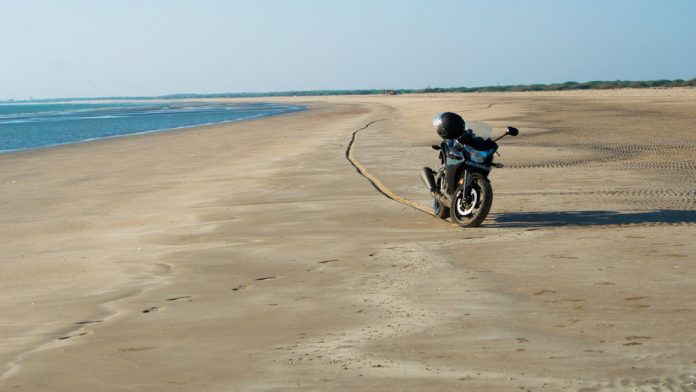 Tell us something about yourself

Born in Rajasthan and brought up in North India. I’ve completed my Engineering and presently working as a Product Manager for Tops Technologies. The million dollar question is ‘Why Traveling?’ The credit goes to my parents. Since the time of me being in my senses, my parents use to take me at different places like Kashmir, Ooty (most famous of all time). After that, they never stopped me from attending summer camps in school. As I was growing up, all these small things somehow developed an unconditional love for traveling. I don’t travel with a purpose. I feel when you travel with a purpose, you chase your purpose rather than enjoying the journey and this is the core reason I choose to travel Solo.

How many Indian states have you visited?

A lot many. But this one incident I keep on remembering now and then. It was during my Solo bike ride from Ahmedabad to Rann of Kutch. It was for 3 days and I covered almost 1300 km during that trip. The moment I reached Rann of Kutch I found it overrated and soon I realized there was no point of spending 3 days over there. I spend a day over there and the very next day I returned to Bhuj. I asked some locals about some nearby places and they all unanimously said, Mandvi. I am a little bit into Wildlife photography so I thought I will capture birds. I finalized Mandvi for that particular day. It is around 60 km from Bhuj. I took a halt after riding 45 km to eat something. I have this habit of talking to people while traveling. I asked them if I will find certain birds, especially FLAMINGOES or not. They said, Mandvi beach is overcrowded and you won’t see birds there and suggested me another place called MODHVA which is far away from the city. I had that gut feeling of going to MODHVA and I asked them for directions. The moment I entered the area of Modhva, I saw a lot many birds flying over and above. I asked people like “vo bade wale birds kaha milenege” and they said they will be found in the beach area. I went as per directions and suddenly I realized there is a dead end, no roads ahead and it was a slope so I was not able to see what is on the other side. The moment I was on top of the slope I saw SEA. I literally shouted with joy. I am a mountain person, still that day I loved the sea. There was not a single person around. I was all alone on that beach with a variety of birds though, there were no signs of flamingos. I spent around 2 hours capturing the birds and enjoying the sound of sea waves. I thought of exploring nearby places so that I can at least have a glance at the flamingos.  I went back, started my bike and tried to ascend the slope. I realized that the tyre was almost half into deep sand and there were more 30 meters to be covered to get on the road. The bike was almost 170 kg so it was impossible for me to push the bike single-handedly. I looked around for help but other than birds I could not find anyone. I waited for almost half hour to figure out a possible way of getting the bike out, but none of the ideas were falling at the right place. Suddenly I see two people popped up from nowhere. I went to them and asked for help. They asked how this happened, and all I gave them the answer is “vo bade wale birds ke chakkar mein.” They smiled and helped me. They said it would be impossible to push this bike in the sand so the other alternate option they gave to ride along the beach to the villages and from there road would be available. I followed their instructions. I rode the bike along side beach. After driving almost 4 km, on my left, there was a village and in my right, there were a lot many boats. Behind those boats, what I saw was “bade wale birds”. Yes, they were the flamingos. Clicked flamingos and promised myself that I would come back again to this place to see them often.

What are the most popular places to visit here:

Dholavira – To get the glimpse of Harrapan culture. They have excavated an entire mountain to find the villages where Harrapan lived. In addition, the salt desert there is much more beautiful and provides much beautiful scenic beauty than Rann of Kutch.

It is always risky to travel solo but as they say, “kahin pahuchne ke liye, kahin se nikalna jaroori hai,” I apply the same thing while traveling Solo. Confidence is the key. When you have faith in yourself, you can handle the situation in any worst case scenario. Apart from confidence, communication is the key. If you can get easily accustomed to the local people, 99% you won’t be in a trouble. I do these things to get myself get going as a solo traveler.