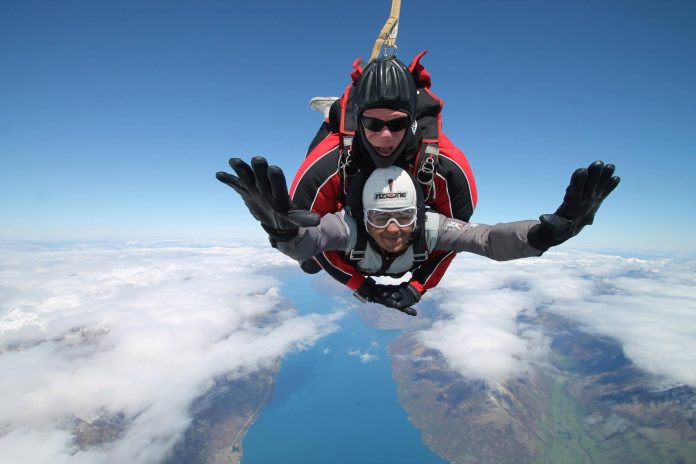 Divvying up his most adrenaline moments while travelling across India and abroad, meet Gaurav Thakrar who has discovered the tranquility in most daunting & notorious adventure and his greatest nemesis is losing his passport on go.

Tell us something about yourself:

A self-made billionaire (in Zimbabwe Dollars), multiple times winner of beauty contests in Monopoly, Education and Immigration Consultant by profession, Traveler and an old-school romantic by heart, adrenaline seeker, and amateur illusionist.

It was the third time that I had signed the “Death Liability Waiver Form” in two days, but my photographer captured a small video before the jump and at the end asked me if I had any message for my family and friends. It was not the best “last moments of life” speech that I could muster and although I was smiling, I was a bit nervous inside. I called up my parents, left a message to my sister and headed towards the plane.

There were four people, including me, who were to jump that day. All of them were to jump from 12,000 feet so it was dizzying to see them disappear one after the other. I silently wished Happy Birthday to my dad and jumped….15,000 feet from the earth’s surface.

It was all whirlwind for a few seconds and then my tandem master Thomas stabilized us as we attained our maximum speed of approximately 174m/s and it felt as if I was soaring like Superman. It was the best feeling ever. Unobstructed view of miles and miles of the beautiful landscape made up of lush green fields, snow capped mountains and pristine blue waters.

The feeling of cutting through the clouds and air for one whole minute was pure exhilaration and was equally relieved with the tug of the parachute opening up. Thomas allowed me to control the chute while descending and we performed 360 degree spins 1 km over the ground. The five-minute parachute descent was the calmest thing I have ever experienced in my life. In the end, I was only too happy to land safely and look back up to see few tiny specks hurling towards the ground for their own experience of thrill and nirvana.

As a kid, I was always afraid to sit even in the Giant Wheel. This fear of heights and fast rides broke when my friend Ronak forced me to ride the Formula Rossa @ Ferrari World (the fastest roller coaster) but it was not facing fear…it was experiencing the thrill though. It was while attempting the Nevis Bungy that I realized that I had yet not overcome the fear. I was nervous, I was really scared, it took a few attempts before I plunged…and it was exhilarating…..pure rush of adrenaline….when 9 seconds seem like a lifetime…It will also be a bittersweet memory that my left shoe dislodged during the jump and fell into the Nevis River below.
The next day I attempted a second, albeit smaller bungy jump from the Kawarau Bridge.
And after the second jump, I realized that I just made a new bucket list…to jump from the five highest Bungy sites in the world.

What are the most popular places to visit at the destination

New Zealand – Milford Sound, USA – Pacific Coast Highway, Canada – Banff & Jasper National Park. In India, it would be Jaipur and Udaipur for their palaces, Goa for everything life and Sikkim for its laidback natural beauty

Losing my passport. I always stay alert and not be forgetful. Rest, I enjoy traveling alone.

Off to Germany, Croatia, Macedonia and Greece in July and Australia and New Zealand in August.