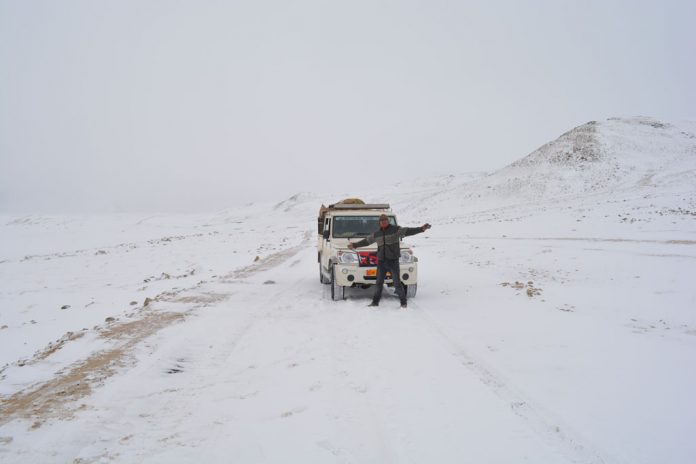 It’s not only difficult, but absolutely dangerous to traverse remote hamlets of Ladakh in the peak winters. The blanket of snow not only makes the destination inaccessible, but also, equally gorgeous when you’re dwelling with the locals. Know Ajaya Kumar Rout’s solo hitchhiking voyage to the land of Bactrian Camels.

Tell us something about yourself and your background

I am a Finance professional working in Gujarat State Petronet Limited as an Assistant Manger (Finance). I love hiking/trekking in the high slopes of the Himalayas, adventure sports and travelling to remote places to explore the way of life of the locals and their cultures. Currently, I’m finding my feet in the world of travel blogging.

How many countries and Indian states have you travelled?

Countries: Australia
States Visited: I will rather put it this way. I have not visited entire North East, Kerala, Andaman &amp;
Nicobar, Lakshadweep and Puducherry.

Any interesting travel moment or incidence

I was hitch hiking in the Changthang Region (Ladakh) in the peak of the winter. The crazy cold January winter held the Changthang plateau to ransom. I was stuck at the Korzok village for two days due to the incessant snowfall. I was afraid I could get stuck there for days &amp; weeks. The mercury was in no mood of moving northwards. No vehicle was moving out of the village due to the snowfed roads and the inclement weather. On the third day around noon the weather finally seemed a bit better. It was still snowing but the wind had receded a bit. I told my homestay owner to help me get out of the village before the road gets closed for the season. My homestay owner told me not to worry. Even if I was stuck there for days and weeks, they would feed me and not charge a penny. They were such beautiful people. I am always in awe of the generosity of the mountain people.
Then my homestay owner went to the village to see if any of the vehicle was moving out towards Mahe. In the mean time I was off to the frozen Tso Moriri lake again for a walk. After one and half hour my owner came rushing towards me in the lake shouting a vehicle was going to Mahe from the village. A pick up van going to Leh to bring the supply items. I put my rucksack in the carriage and hugging my homestay owner and my guide we left the Korzok village. It was still snowing and the temp was hovering at -28 degree in the mid day. Apart from the driver there were three Changpa nomads with us. We left Korzok for Mahe. There was not a single human being on the road. The striking view of the snowclad mountains were breathetaking. But the nightmares were yet to come. After 15/20 km the snowfall went berserk and it snowed heavily turning the entire Changthang into a snowball and the crazy wind was back with full force. We were caught in the middle of a snowstorm. The wind was lashing, making the snow spin wildly in the air. The roads and the trails became invisible in no time. I was frightened and taken aback. The driver was driving wild without knowing where the road was. I requested the driver to stop but he had his way driving wild making me pray for my life. He told me he was the local guy and he knew the road well. I pleaded him to stop as I feared we could slip into or roll into the abyss in a single misjudgment. Finally the driver stopped the vehicle when the visibility turned to minimum. The wind blasted the valley with full fury spinning the snowflakes wild. We sat inside the vehicle waiting for the snowstorm to recede. That was an experience of my life. After 40/45 minutes the snowstorm receded and we were back on the road. Then I pleaded the driver to let me sit in the carriage. I wanted to have that visceral feeling of cold and cold wind of Changthang. The driver was in no mood to allow me to sit in the carriage in such freezing cold. But he gave in to my request and I sat on the carriage as the van wade through the deserted snowclad roads through the mountains in the Changthang plateau. That was one of the most adventurous moment of my life.

I always lose weight after a trip. I have not found a solution yet but now a days I’m carrying enough nuts and energy bars with me.

“Travelling-It makes you speechless and then turns into you a storyteller.”
– Ibn Battuta

Any travel tips for the readers?

When you travel far into the place, experience local way of life and culture.

I’m off to Spiti Valley.