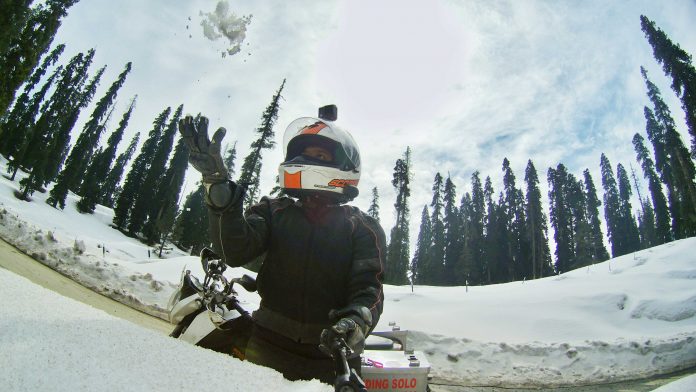 Fuel up your imagination about a solo female biker and she will rock you over and above by her beyond bravest solo journeys in India and abroad. Pooja Dabhi is truly an inspiration for female bikers, so let us know about her expeditions and adventurous life so far:

Tell us something about yourself-

Ah, this becomes a tough one. I started traveling at a very young age. Planning trips and bunking out to places with friends is what most of the teenagers do. So did I. Soon from local transport, I got on to a moped bike and traveled some roughly 32000+ kilometers in nearly 2 years of my architectural degree in Maharashtra itself. Soon, I had realized that I had unknowingly gained good riding skills and was prepared to upgrade my bike to a bigger cc motorcycle to travel beyond states, overnight journeys, hundreds of more kilometers, which all was just not possible on a moped.

I acquired a KTM Duke 200, rode thousands of kilometers around Maharashtra, Gujarat, Karnataka, Kerala, and Tamil Nadu, a lot many times to Goa. I noticed myself slower than the boys at Ghat sections where my speed used to drop which I hated because I couldn’t cope up with them and I decided to go and learn it professionally onto a racetrack. What I actually did and got selected into Honda Ten10 racing team, which is a factory team for Honda manufacturers.

I won a lot of pole positions, podiums, trophies, got a whole new me getting into racing. I loved speed a lot by then. Riding for 2015 and 2016, I had got better and better in riding and controlling a motorcycle.

How many Indian states & countries have you visited-

Just a few days back, I have returned from the most epic expedition of my life. I biked in India and Nepal on my motorcycle. Nepal for 13 days. So the journey started on 3rd January 2017 and ended on 27th April 2017. Being the longest journey, it had many challenges since I was doing it solo and was completely responsible for whatever may happen. I had the greatest of experiences in this ride- good, bad and altogether the best. Have challenged myself to the limits and have successfully done what I commenced.

Being alone was scary in those initial days but soon I got used to it. I explored and taken thousands of pictures and videos on the way. I met some inspirational travelers and bikers from around the globe on this ride. I came across so many incidents wherein people assumed me to be a boy because I was into all that black colored gears and all alone with a fully loaded bike. Even cops at many places got mistaken by the same- being a girl and still riding.

Any famous places to visit in the particular place mentioned-

I had lots of fears before this trip. Fear of landing into a place which has unknown languages,  people I meet when I would be traveling on my bike alone, bad roads which might lead to breakdowns and in those isolated place what if something goes wrong. A lot of things kept running through my mind each day on the road. I had new fears every day, but only when I reached Nepal and had crossed the country border by road all alone and be-quested myself time to relax and think over my life, ride and everything that happened around I realised I had been overcoming all my fears by just moving on every single day as bold as I could be the previous day. I had left with no fears. There are people who ask me are you not scared to go alone for so long and so far I just say that “no am not scared anymore “. Key for overcoming any fear is to keep moving.

I was never going to go if I waiting for someone to come with me.

What’s the strangest thing you tried in your travel –

I dredge up the moment when I had reached Jaipur and checked into the hostel and parked my bike below the building which was the back Street of Hawa Mahal road. Just next to my bike, there was this strange person (beggar) sitting with 2 street dogs. Out of nowhere, I started a conversation with him asking the names of his dogs and ended up talking to him in English.  Yes, he was all educated but just very distracted with the fast pace life nowadays. 2 days of stay in Jaipur I kept talking to him now and then. He worked the whole day and feed himself add his 2 dogs. He had been traveling many states of India and Bangalore is the place where he had studied decades back. It’s hard to believe but it was very strange to me.

Travel as light as possible, take in the most budgeted trips, avoid hotels stay into hostels, to know the place better talk to locals instead of searching hundreds of travel agents.

Where are you off to next-

After a spectacular India and Nepal ride, I am on my toes for the most wonderful journey across the globe on my bike, which I have already started to prepare for. Would take time but I would do it anyway.