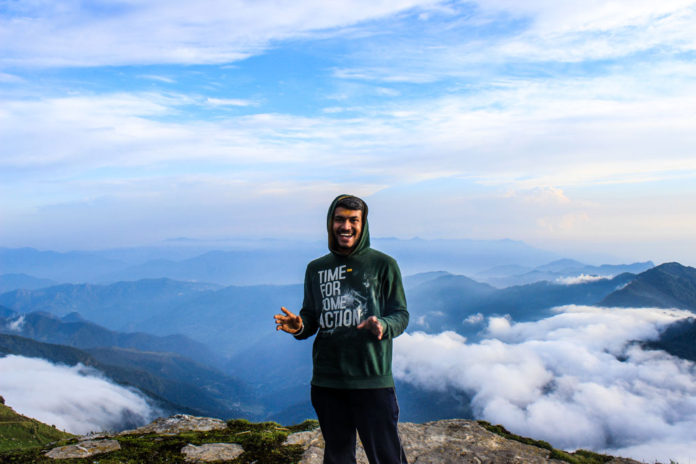 One of the youngest solo travellers of the community, Ishan Patel, who recently traversed the unexplored terrains of Uttrakhand and trekked two mountain peaks and heard some amazing stories on his way. Let’s listen to his inspiring story:

Tell us something about yourself and your background:

I’m a wanderer, a mountain person and someone who loves to explore destinations. Photography and football are my passion. I am a Barodian with little Surti flavour. I have graduated from NIT Surat and currently working with AYM Syntex Ltd, Silvassa.

How many countries and Indian states have you travelled?

Any interesting travel moment or incidence (share in detail):

My Solo trek to Uttarakhand is something I will never forget in my entire life.

I came directly to Haridwar from Vadodara. To my surprise, it was 40 degrees in Haridwar at 1600 hours. You’ll find many places to eat as you leave the railway station. But I found it very difficult to get a room in Haridwar, the reason was some teenager had hanged himself a day before I went there. So no one agreed to give a room to a single person. I was terrified that where I would stay for the night, but luckily after convincing a manager for half an hour, he agreed to give me a single room. After the settlement, I went to explore the city. The streets were so narrow and full of people, excessive honking, and so much traffic. But as I reached the holy Ganges, I forgot all the worries, it was really a wonderful experience attending the “Aarti” of the Ganges.

Later, I started my journey for Ghangaria as planned from where one can go for Valley of Flowers or Hemkund Sahib. First, I went to Govindghat by bus, which is 18 km from Joshimath. Govindghat is a hamlet on the banks of Alaknanda River. From there, it is a 13 km trek to Ghangaria. The path was made of stones, well maintained and horses were also there for those who don’t want to sweat at all. Ghangaria is situated at 3,050 m altitude, the views were fantastic, and the hamlet has one single street full of hotels, restaurants and shops. I met a guy from Australia who was a veterinary doctor by profession. He left his high paying job in Australia and joined an NGO for greater good. He was treating ill horses which were used for transportation purposes in the nearby region. I asked him why he left his job and his answer was very inspiring. He said, “In my country, I was treating pets who lived in big houses. But I wanted to help saving the poor ones which needed me the most.” He said he will be going to Mumbai after this. This part of the journey is the most wonderful when I get to meet such people and listen to their inspiring stories.

As planned, I took a bus for Rudraprayag from Saari and from Rudraprayag I reached Rishikesh. I met three ladies in a café in Rishikesh, they were all from Spain, and came here in search of God! We had a great discussion on religion and stuff, how people’s belief in god changes from country to country. The food there had a great influence of European dishes. Though,

So, this was my solo trip to Uttarakhand. It was really an amazing experience. Met awesome people, learned awesome things, and seen awesome terrains.

Most popular places to visit at the destination

What’s the strangest thing you tried on your travelling days?

When I was exploring the Mysore city I hitchhiked with a complete stranger to Bangalore city. It was getting dark and I had to reach Bangalore before midnight, so on the outskirts of the Mysore city, I started waving hands to cars and luckily, one fella stopped his car and took me in!

Any travel tips for the readers?

I planned this whole trip on my own, from the day to day itinerary to the budget, all I had planned two months before. I covered two treks and four towns in my solo trip. When you are traveling solo, you need to take care of mainly three things for each day:

1) Where you are going to stay for the night,

2) How you are going to manage for food, and

4) To ensure low weight backpack, technical shoes and gears while trekking in the Himalayas

It’s hard to say, whenever I get some time off from my work, I acquire data of some trekking place nearby or something which is less explored, fuel up my bike and vanish!