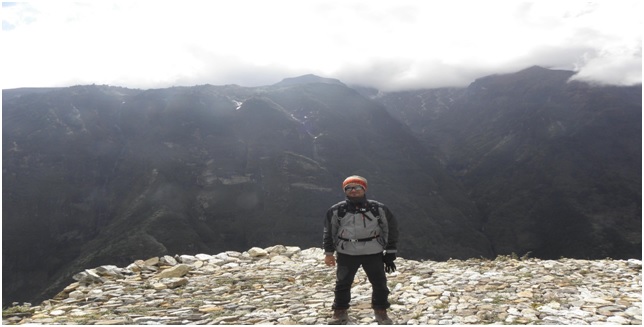 Traveling solo (not alone) is not merely about fears & thrills, but it is also about scaling up your own mental strength and a self-discovery. Meet Pavitra Patro, a Guinness World Record Holder, who is divvying up his experience of climbing the mighty Lobuche East Summit in Nepal in 2016.

Tell us something about yourself:

Being a slightly different type of a ‘Patriotic Indian,’ I have made it a mission to dedicate all my mountaineering expeditions to ‘Revolutionary Freedom Fighters’ of the country.

I am a Guinness World Record Holder and two times the Limca Book of Record Holder. I am a renowned mountaineer and a motorist from Ahmedabad, Gujarat. Also, I’m a Tata certified motorist.

February 2016, I had decided to dedicate a mountaineering expedition to Bharat Ratna Shri Sardar Vallabh Bhai Patel, who led the Herculean task of forging a ‘United Independent India.’ So, I began my preparation for Lobuche East Peak (20,075ft / 6119m) near Mount Everest (29,029 ft / 8848m) in Nepal. The preparation consisted of mainly endurance exercises like–

So after more than 7 months of rigorous training and finalization of the support agency back in August 2016, I left for Kathmandu on 22nd October 2016. On 22nd itself, we checked our equipment and supplies and made up a list of essentials that we need to buy or rent for the expedition. The following day was a busy day as we need to get the permit from the Nepal Government. It may be noted that going without the permission is illegal and will attract a penalty and a rigorous jail term and even a permanent ban on entry to

Nepal.Oct 24, 2016
We woke up at the break of the day to leave for Lukla Airport, which is one of the world’s most dangerous airports due to its short runway. 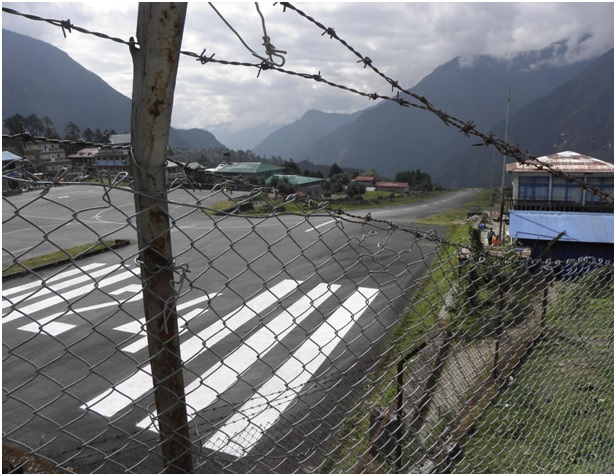 After having lunch at Lukla, we proceeded towards Phakding (2850m). On our way, we got the permit, checked at Solukhumbu Tourist Police Station. Some of the villages that come on our way are Cheeplung, Chaurikharka, etc. We retired at Phakding in a wooden hut overnight.

I woke up at 4 am and geared up to start my trek by 6 am towards Namche Bazaar (3443m). It should be noted that the earlier you start the better it is for any mountaineering expedition. No doubt it would be chilling, but it is for your very own safety. On the way, we had our passports and permit formally checked at the entrance of Sagarmatha National Park and then had lunch at Jorsalle. On this way, two rope hanging bridges would come. We took a night halt at Namche Bazaar and an acclimatization trek the next day. If one needs to buy something essential buy at Namche Bazaar itself as beyond this point the prices will be sky high. 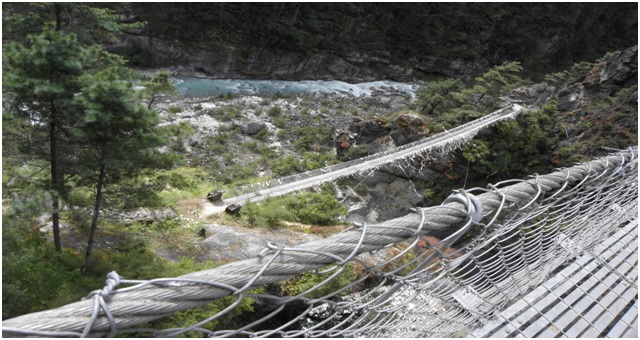 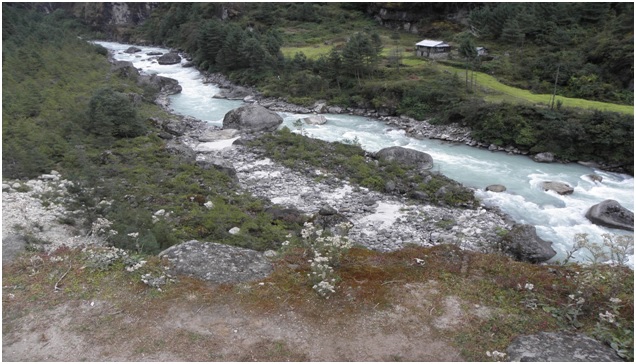 Oct 27…. we woke up early. As this was my second trek on this route, I knew this is going be the first big challenging day as the ending part of today’s trek would be a steep hill climb of at least 2 hours with nowhere a downward slope and on the way you would cross 4-5 rope hanging bridges to Tyangboche (3876m).

On the way, you will see Mount Ama Dablam which is even though less than 7000m but is technically more difficult than Mount Everest. But we reached Tyangboche before our estimated time, so we decided to trek further to Debuche (about an hour trek more). Tyangboche is a very busy place because of the largest Buddhist Monastery on the way to Mount Everest. We had a night halt at Debuche in a wooden hut. 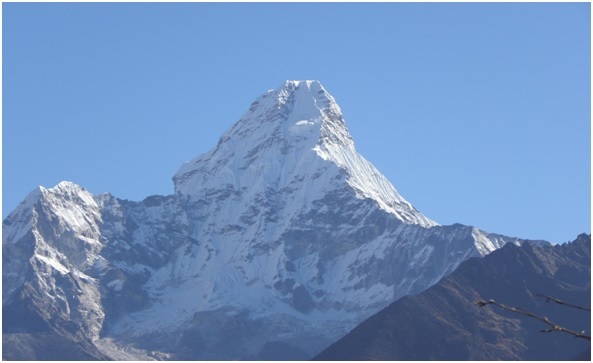 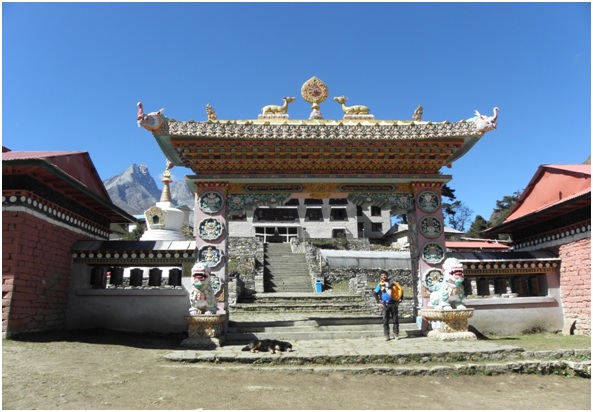 Next day, I packed my luggage and left Debuche by 6 am to reach the next campsite Pheriche (4200m).

The following day, on our way from Pheriche to Lobuche Village (4950m) we crossed the Mount Everest Memorial, where you would find hundreds of memorial in remembrance of those who lost their lives on Mount Everest. It was an emotional moment for me. I sat in silence for 15 minutes to pay a tribute to them. Next 2 days were the climax phase of my expedition. I had left Lobuche Village (4950m) for Lobuche East High Camp at about 5400m. We had our dinner early that night. I tried to sleep off, but couldn’t because of anxiety.

At 2 am on Oct 31, we started our climb to Lobuche East Summit (6119m/ 20075ft). It was an upward incline and in order to avoid traffic as there is only one rope we had to keep our pace abreast. At about 7.40 am we were the first to reach Lobuche East Summit that day. Then I paid a tribute to Bharat Ratna Shri Vallabh Bhai Patel on his birthday by hoisting our beloved India Tri Colour National Flag at Lobuche East Peak. 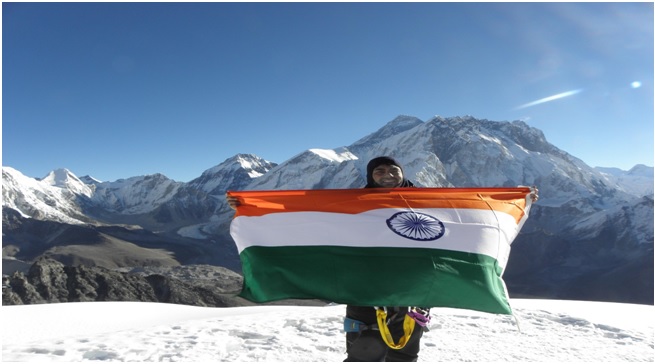 After this, we immediately descended as I wanted to reach Pheriche back to cut the cost. We had reached Pheriche by 8 pm, so it was almost 18 hours of non-stop climbing and trekking without rest and food. Generally, nobody does this as it is life risking.

For the next 03 days, we climbed down and trekked back while passing through Pheriche- Debuche-Tyangboche- Namchee Bazaar- Phakding-Lukla and then flew back to Kathmandu.

Received a certificate issued by Nepal Government for the successful summit of Lobuche East Peak.

What are the most popular places to visit here?

The biggest fear is the climax phase while mountaineering as everything depends on the weather window and that I have to make the summit attempt in those conditions. To overcome this, I always keep 1 or 2 days extra and always try to strictly adhere to the schedule that at times is painful but it pays.

Exploring the horizon of oneself.

What’s the strangest thing you tried on your journey?

The last day when I climbed downed to Pheriche instead of staying at the Base Camp (higher campsite) which almost everybody does. At Pheriche when we reached it was night 8 pm and believe me it was the craziest decision I’ve ever made in this expedition. I was completely exhausted after doing Lobuche East Peak Summit with almost no rest for 18 hours.